If you visited our shop and don’t see the item online, please contact us at hennatat@yahoo.com

The Zapotec Indians of the Oaxaca Valley in the southern Mexican State of Oaxaca (pronounced Wah Ha Kah) are the artists who create this unique and colorful art form.

Animal figures have been carved in the central valleys area of Oaxaca by the Zapotecs since the pre-Hispanic period.

In 1936, a Mexico City artist by the name of Pedro Linares fell ill. In his fever dreams, he was in a forest with rocks and clouds, many of which turned into wild, unnaturally colored creatures, frequently featuring wings, horns, tails, fierce teeth and bulging eyes.
After he recovered, he began to re-create the creatures he'd seen, using papier-mâché and cardboard.

His fantastical creatures inspired the artists of Oaxaca, who used their skill and artistic abilities to to carve and create intricate and colorful wooden alebrijes.

Carved from the Copal Tree when the wood is green, the carving is done with machetes, kitchen and pocket knives.
After carving, they must be carefully dried for up to 10 months. They are then carefully hand painted with beautiful, intricate patterns.

Some claim that there is mysticism involved in the making and owning of alebrijes, with parts of certain animals representing human characteristics.

The pieces we offer are high quality, produced by skilled artists from Oaxaca. Each is hand carved, hand painted, and unique.

Alebrijes were featured in the 2017 Pixar film, Coco. 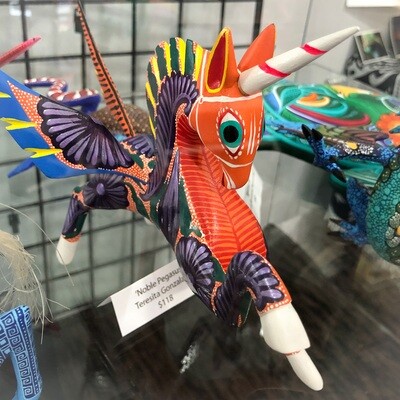 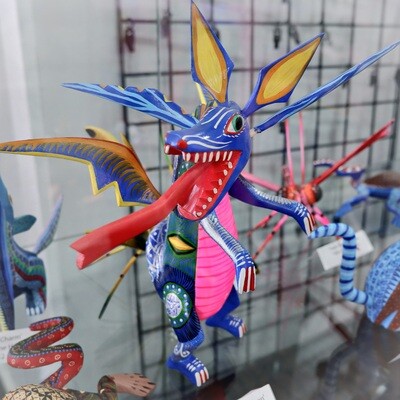 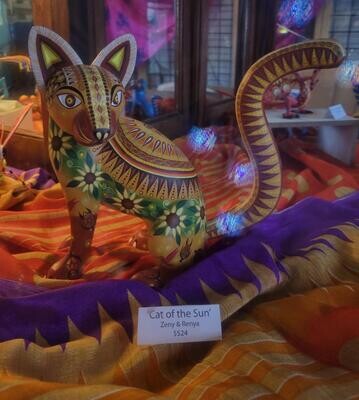 For any questions or inquiries please email hennatat@yahoo.com